The Scenario Editor is a graphical interface that allows a user to create objects in categories, and to assign values to those objects' attributes, in a dynamic web form interface.

The Scenario Editor is perfect for testing your encoding by quickly generating fact scenarios and seeing if they behave as expected.

If your project is not published, only the owner of the project will be able to run the Scenario Editor from inside the test interface. If your project is set to published in the Rule Editor screen, the scenario editor for all of your tests will be available to unauthenticated users.

To allow users other than yourself to use Scenario Editor with your encoding and tests, you must set the Project to "Published".

You will be taken to a user interface with a button bar across the top, followed by a set of tabs for "Facts" and "Answers". 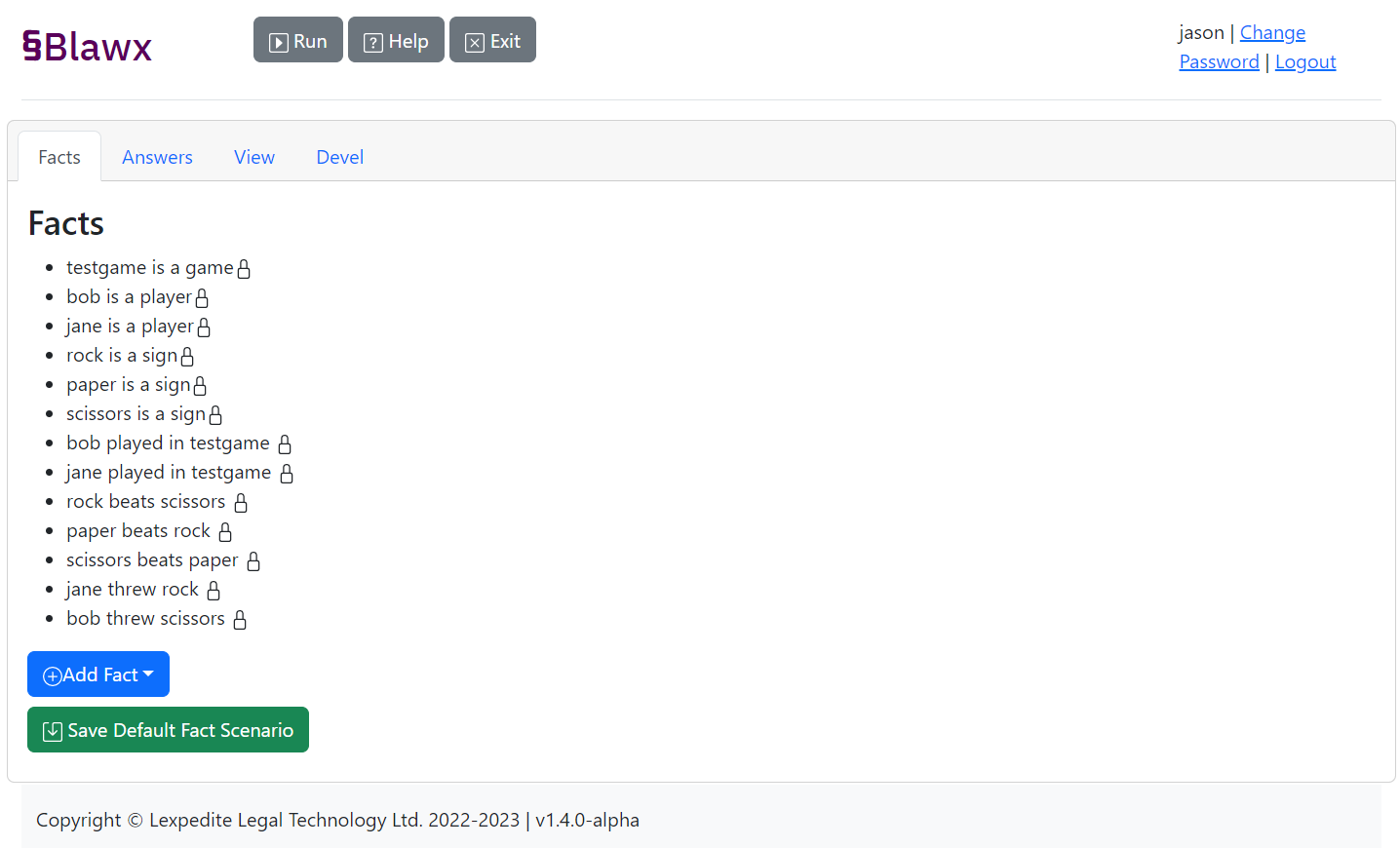 The buttons available in the BlawxBot interface are: 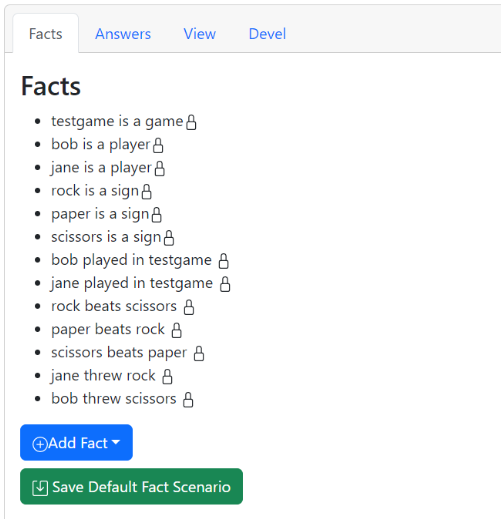 The form is a nested tree. At the far left of the form you will see a list of the categories that exist in your test. By clicking the "add" button with the plus icon, you can create a new object in that category and give it a name.

Note that names of objects must begin with a lowercase letter, cannot include spaces, and must be unique. These requirements are not yet enforced by the Scenario Editor.

If you create an object, you will be able to expand or collapse the category by clicking on the "arrow" icon. The name of the objects you create can be changed in the interface. Objects can be expanded or collapsed in the same way.

Objects will be displayed in the interface using the category customization specified in the code, if any.

You can add a value to an object's attribute by clicking the "add" button on the attribute name inside the object.

Values can be also be changed after they have been created. Values are displayed in the interface using the attribute customization specified in the text, if any.

Values and objects can be deleted by clicking on the delete button with the "trash can" icon on the right side.

You cannot delete categories, or attributes. Note that if your test or your encoding defines any objects, and the values of attributes of those objects, those objects and values will also appear in your fact scenario editor form, but you will not be able to modify or delete them.

When setting the value of an attribute that has a category as it's type (for example, "friend" might be an attribute of a person, and also refer to other persons), the interface will allow you to choose from the objects that already exist in the target category. To refer to an object, it must be included in the category first. So for example, if you want to say that jason and june are friends, you must first create both jason and june in the category "person", and then in the "friend" attribute of june, add jason as a value.

The lock button tells the reasoner which assumptions you would like it to make.

If you leave the lock "open" on a category (let's say "person"), that is equivalent to writing code that says "assume {X} is in the category person". It allows Blawx to hypothesize the existence of additional members of that category in order to attempt to answer the question.

Similarly, if you leave the lock "open" on an object's attribute (let's say the "friend" attribute of the "bob" object), that is equivalent to writing code that says "assume {X} is a friend of {bob}".

If you leave a category or attribute value "unlocked", click "Run", and the "Add" button does NOT turn green, that means that objects and values added in that location are irrelevant to the question you are answering. You can therefore "lock" the category or attribute again, which might make your test run faster.

Note that there is no relevance information available until after you click "Run", and it will only be calculated for "unlocked" categories and attributes.

The answers tab of the scenario editor will display answers that Blawx can find, with all the explanations for those answers, in a format similar to the output of the test editor. it will be displayed automatically when you click the "Run" button, or when you click on the "Answers" tab at the top of the interface.

Note that if answer can be found by making assumptions that you allowed for by "unlocking" categories and attributes, all those contingent answers will be included, also. You can see which answers are contingent by looking to see whether there are parts of the explanations that read "by abduction we conclude that".

Scenario Editor is a very new feature, and there are a number of known issues:

Usually, you will want to lock all of your categories and attributes before running a query.

Note that leaving even a small number of categories and attributes unlocked at the same time can result in a large number of potential answers to your question, which can slow down the speed of the reasoner and the Scenario Editor.

When setting the value of an attribute that has a category as it's type (for example, "friend" might be an attribute of a person, and also refer to other persons), the interface will allow you to choose from the objects that already exist in the target category. To refer to an object, it must be included in the category first. So for example, if you want to say that jason and june are friends, you must first create both jason and june in the category "person", and then in the "friend" attribute of june, add jason as a value.

The Scenario Editor will allow you to add as many values as you like to an attribute, including duplicate values. However, duplicate values do not have any meaning to the Blawx reasoner. It treats your fact scenario as if each value occurred only once.

Note also that if you re-enter an object or value that was already provided by the code or your test, it will appear in the list as normal, but it will be locked, and you will not be able to delete it.

True / False Values (You Usually Only Need One)

There are very few circumstances in which setting an objects true /false attribute to both true and false will be meaningful. In most cases, the attribute models a thing that can only be true, false, or unknown about an object. So it might seem unnecessary to allow the user to apply more than one.

However, while there are very few circumstances, there are more than zero, so you need to be careful you are not inadvertently adding multiple true / false values unintentionally.