Categories, Objects, and Attributes are how Blawx organizes what it knows about the world.

A Category is a type of object. For example, "Car."

A Category has Attributes, which are names for things that you can know about things in that Category. Attributes also describe the type of data that can go in that attribute. For example, "a car has a top speed, which is a number."

An Object is a specific thing in the world you want to model. An object can have any number of categories. An Object has the same attributes as all of the categories it belongs to, which hold that information about the object. For example, "my car's make is Ford, and my car's model is Mustang."

The information that you put into an object's attribute has to be of the correct type. You can't put a number if the attribute is supposed to hold a true or false value, and vice-versa.

An easy way to think of a Category is as a description of a blank form. The form might have a name, like “Application for a Permit”. That is like the Category name. A form will also have fields that can be filled in, like “Applicant’s Name". Those are like the category’s attributes.

An attribute can hold either a basic data type, or objects in a category.

The basic data types are numbers, true or false values, dates, and durations.

Not only can you use your Categories as a type, but you can use your category as the type of an attribute inside itself!

For example, you can say that a Person has a friend, which is a Person.

When you drag a category declaration block onto the workspace and click "Save", a corresponding category block is added under the “known categories” drawer of the toolbox. This block is used in blanks that require or allow a Category as a value.

Note that if you have two category declarations with the same name defined, Blawx will create two different known category blocks with the same text, using either of them has the same effect. So it is best practice not to have duplicates in category names in order to avoid confusion.

Category names should not have spaces in them, and must start with a lowercase letter. Blawx will not stop you from creating a category with a space in its name, but they will not work properly.

Adding Attributes to a Category

For example, to say that “a person has an age and a best friend” you might set out an attribute declaration block like this:

Remember, all new category, category attribute, and new attribute blocks need to appear inside a Fact block to work properly.

The name of an attribute must start with a lowercase letter, must not have spaces, and must be unique across all categories.

When you create an attribute using the above blocks, attribute selector blocks will be created that looks like this: 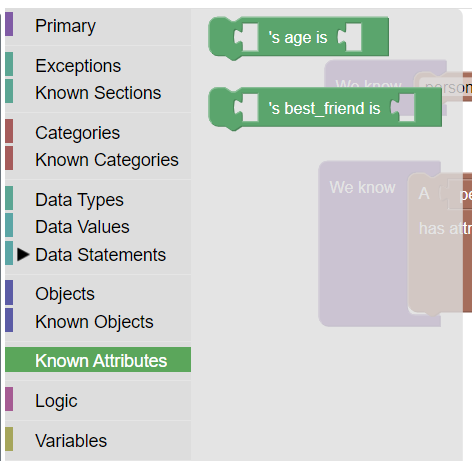 In explanations, by default, the assignment of "38" as the value of "age" for the object "bob" will be displayed as "age holds for bob and 38".

The block allows you to choose the order in which the object and the value are included, and the text that should appear before, between, and after them. By default the order is "object, then value". And the words "object" and "value" appear in that order below. If you change the order to "value, then object" in the dropdown, the illustration below the dropdown field will be updated, like this:

Once you have selected the order that you want the object and the value to appear, you can specify the text that appears before, between, and after them. For example, imagine that you have a category called "Animal" and an attribute called "legs" that was supposed to hold how many legs the animal has.

Here are three different ways you might want your customized attribute block to appear, and how to achieve that effect using the attribute customization block: 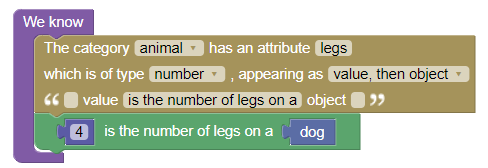 All three of these examples mean the same thing.

If you leave all three fields blank, Blawx will still know what attribute the block is for, but your users will have no clue. Make sure to customize attribute blocks in ways that sound natural to your users, but are also very clear about which attribute is being modified.

In Blawx you can do this using the category equivalence block, which looks like this:

Object names should start with lowercase letters, and should not have spaces in them. Blawx will not stop you from creating an object with a name that has spaces in it, but it won't work properly.

When you drag an object declaration onto the Workspace, a corresponding Object Block appears in the “Known Objects” drawer of the Toolbox. 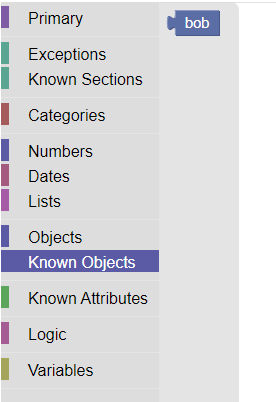 The object block for “Bob” can be used anywhere a block is expecting an or accepts an object as a value.

Giving an Object another Category

All objects are created inside a category. But it is possible to assign additional categories to objects that have already been created. You can do this using the object category block, which can be found in the “Objects” drawer of the Toolbox. It expects an object block and a category block. For example, if we wanted to say that in addition to being in the category person, "bob" is in the category "mammal", we could create a statement like this:

Sometimes your Blawx code will get data from more than one source, and each source may create its own versions of the same objects. In those cases, it can be useful to state that two objects are the same object. You can do that using the object equivalence block, which is found in the “Objects” drawer of the Toolbox, and which looks like this:

The object identity block takes two object blocks. To say that “Bob” and “Robert” are the same object, you could do this:

Adding Attributes to an Object

Once there is an object in the database, you can use the attribute selector blocks to assign values to that attribute for that object.

For example, we have said that "bob" is a person. Now we can say that bob is 35 years of age, by taking the attribute selector for "age", and giving it the object selector for bob and the number 35 as inputs, like this:

Attribute names must start with a lowercase letter, and must not have spaces in them. They must also be unique across all categories. Blawx will not currently stop you from creating invalid attribute names, but they will cause errors.

When working with attributes you will want to be careful with how you name them. Blawx will not stop you from applying an attribute defined for “cars” to an object in the category “bicycle”. If you need to know how many seats both categories have, but you want to avoid the implication that bikes have car seats or vice-versa, you may want to name the attributes “bike_seats” and “car_seats” to make it clear what you are referring to.

If you create two attributes both named “seats”, they will both appear in the Known Attributes drawer of the toolbox, but Blawx will treat them as two copies of the same attribute.