Laws are typically drafted in a style where the rules that apply most generally are stated first, and more specific variations are stated later. Blawx calls this style "defaults and exceptions," and gives you a number of tools you can use to be able to encode defaults and exceptions without needing to modify multiple sections of code when a new exception is created.

Defaults and Exceptions in Blawx

The basic system of dealing with defaults and exceptions in Blawx can be described by these steps:

Blawx provides one block for each of these four capabilities, plus blocks that allow you to specify sections of the law.

Pre-Built "According To" Rule Block 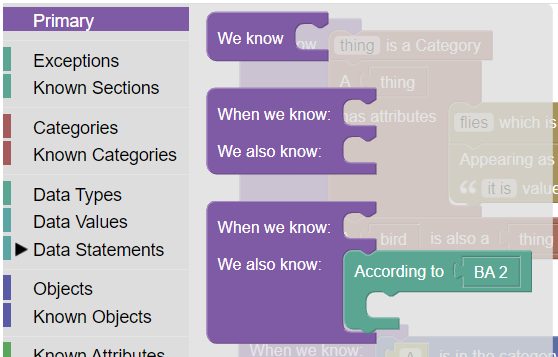 Asking if Rules Reached a Conclusion

Asking If Any Rule Reached a Conclusion

Asking Which Rules Reached a Conclusion

If you would like to find out which sections of your law reached a certain conclusion, you can find out by using a named variable in the according to block. This will typically only be useful in a question, and not in the conditions of a rule, because there is not currently a way to generate or use section values other than by using the section selector block, and displaying them in answers. A question asking "which sections concluded that socrates is mortal" could be posed like this:

When you make a query with the holds block, Blawx will only look to see if a conclusion has been overruled by another conclusion when those two conclusions "oppose" one another. The opposes block looks like this:

By default, there are two types of statements that automatically oppose one another, without you needing to use an opposes block to say so:

These two cover a majority of the types of opposition that you will usually want to use. The purpose of the opposes block is to allow you to be explicit about statements that oppose one another that Blawx cannot infer.

Opposition is not Inconsistency

If you make two statements opposing using the opposes block, that applies only to the context of when you query whether either conclusion "holds". Blawx will not impose a general prohibition against concluding both things at the same time.

If you want to make two statements incompatible with one another, so that Blawx will never find an answer set that includes both statements, and regardless of whether the defaults and exceptions system is used, that is accomplished using the logical constraints block.

When calculating which conclusions "hold", Blawx first finds opposing conclusions that are reached by sections of your rules, and then sees whether one of your sections overrules the other. Providing Blawx with these overruling relationships is done with the Overrules block, which looks like this:

Dealing with Multiple Conclusions Per Section

Overrules are specified as one section overruling another section, and are not specific about which conclusion from that section is overruled. If you have sections that reach multiple conclusions, and the overrule relationships are different by conclusion, you will need to divide that section of your law into multiple sub-sections using the span feature of the CLEAN syntax. That will allow you to get a one-to-one relationship between sections and conclusions, so that your overrules block can be specific about what is and is not overruled in each case.

Deciding Where to Put the Overrules Block

Laws use a large number of different terminology to describe defeating relationships. Consider that a law might say "the default applies", and then say "despite the default, the exception applies." Here, the relationship between the two rules (exception overrules default) is specified in the exception. This can be called a "despite-style" overrule statement.

A law might also say "subject to exceptions, the default applies", and then say "the exception applies". The same overrule relationship (exception overrules default) is specified, but this time it is expressed in the default. This is a "subject-to-style" overrule statement.

Both of these styles are used regularly in legislative drafting, and the overrules block allows you to describe this relationship in your code wherever it appears in your law. If you are implementing a "despite-style" overrule statement, the overrule block goes in the code for the exception, and states "this section overrules other section". If you are implementing a "subject-to-style" overrule, the overrule block goes in your default rule, and states "other section overrules this section".

This flexibility about where the overrule statements are placed gives you the ability to keep your code organized the same way your laws is organized, which makes your code easier to write, verify, and maintain.

Sometimes, there are complicated, conditional overrule statements set out in legislation. For example, consider a rule that says "this exception overrules the default for events occurring prior to date".

Because overrules blocks are statements, then can be used as the conclusions of rules. This makes it possible to create a rule that will conditionally determine whether an overrule statement applies, depending on facts like whether an event is prior to a date.

Note that the conclusion that the overrule exists can only be true or false in a given explanation. If you need the overrule to be active for some aspects of an explanation and not for others, such as when a rule states "this exception applies for the purposes of calculating salary in this section", you may not be able to get that effect by making a conditional overrule statement. 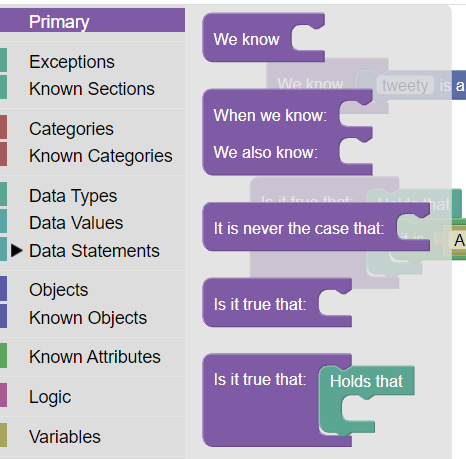 The Meaning of Holds

In the current version of Blawx, "holds" has a very simple definition.

A conclusion holds if:

A conclusion is defeated if:

We have plans to expand the definition of "holds" in future version of Blawx to be able to deal with more complicated scenarios, but for now, the definition above is all that Blawx uses. One important shortcoming to note is that Blawx does not currently check to see whether the defeating section is itself defeated. As a result, if C defeats B, and B defeats A, and all three are concluded, C will hold as would be expected, and A will hold, which is likely not what your legislation meant.

To get around this in the meantime, it would be necessary to say explicitly in your code that C opposes A, and C overrules A.

If you use "according to" to describe your rules, and you use "holds" in your question, your explanations will have access to information about the sections of your law by which those conclusions were reached. 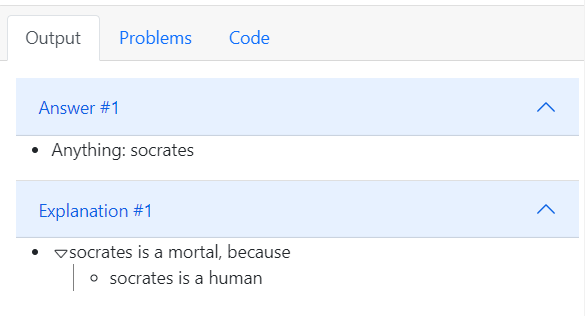 If, instead, you encode "according to section 1, humans are mortal", and in the question you ask "does it hold that anyone is mortal", your explanation will read "according to section 1 socrates is mortal because socrates is human." Also, the words "section 1" in the explanation will be highlighted, and when you hover over them you will have access to the text of the source rule. 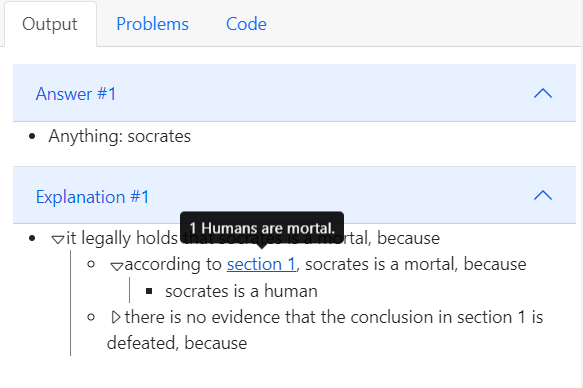 Currently, the defaults and exceptions system is the only way to get access to legislative text in your conclusions, so it can be a good idea to use the "according to" blocks and "holds" blocks in your code for that reason alone, even if you have no use for "overrules" or "opposes".

An important thing to remember about how Blawx deals with defaults and exceptions is that it requires you to be explicit about which conclusions oppose one another, and which sections of the law overrule which other sections of the law.

Currently, the only way to select sections for use in an overrule statement is using the section selector. If one rule is "despite section 1 subsections (1), (2), and (3)", the code for that rule will require three overrule statements. We have plans to add features to allow you to select sections and their subsections at the same time (scope selectors). We also want to allow entire rules to be organized hierarchically with regard to one another, so that you can easily encode and overrule by "any rule in a regulation made under this Act." Those features have not yet been implemented.