Often, you will need to take aggregate values, such as a sum of a large number of values, or a count of how many values exist for a given attribute. Blawx provides basic support for dealing with lists of values, through a set of five blocks: the List Datatype Selector Block, the Empty List Block, the First / Rest List Block, the Collect List block, and the List Aggregation Block.

The List Datatype Selector Block allows you to specify that an attribute of a category should hold a list. You do not need to specify list-type attributes in order to use lists in your encoding, however.

The First / Rest List Block and Empty List Block are used to manually specify lists in your code. The First / Rest Block is unusual compared to how lists are dealt with in other languages, because it accepts only two items, and they are expected to be of different types. The first input is expected to be the "first" value in the list. The second input is supposed to be "rest" of the list, and should be bound to a list, not a value.

The last element in a list is always represented in this way, by the value of that element, followed by an empty list.

While a little unintuitive, this structure works better in a visual block language than the way lists are usually generated in text, and it provides an easy format to write recursive rules for dealing with the contents of a list.

The collect list block is used to collect all of the bindings for a single variable in a given question into a list. Most often when using Blawx you will not create attributes that are themselves lists, but instead you will generate a list from known values provided by the user using the collect list Block.

Once you have created a list of values, you will be able to use the list aggregation block to generate a single numerical value on the basis of that list. The current options are to count the elements in a list (which will work regardless of the data type of the list elements), and to take the sum, average, minimum, and maximum of a list (which will only work for lists of numbers).

You can load the List Demonstration example to see an example of how these list blocks can be used.

If you create a person, and give it one or more number values for "score", Blawx will calculate the person's average score after adding a score of 10 to the given list. 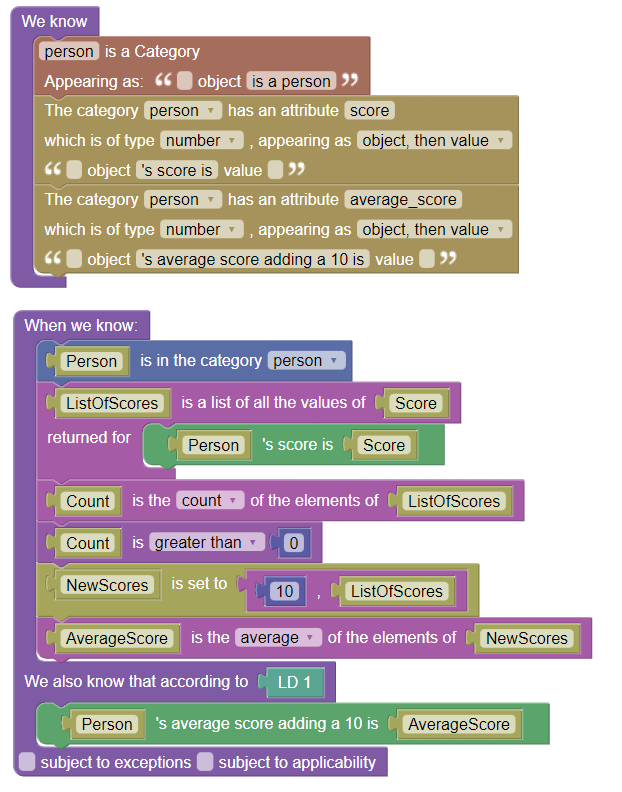 First, a category test is included, which is good practice, makes your code more efficient, and helps the scenario editor to calculate relevant questions. Then, the collect list block is used to find all of the scores for that person and combine them into a list. Because we don't want to add a score for a person who doesn't have one, the list aggregation block is used to count the number of elements in that list. Collecting a list always succeeds, because an empty list is still a list. So here, the code uses a comparison block to check that there is at least one score provided. If not, the rule will fail at this point.

Then, the variable assignment block is used to create a new variable for a new list, and it is set to the value 10, followed by the list that had already been collected. Because the second input for the first / rest block expects a list, we can provide the name of the list we previously collected without needing to specify that it is terminated with an empty list.

Finally, the list aggregation block is used to calculate the average value of this new list, and in the conclusion that value is assigned to the person's average score attribute.

This is a very minimal implementation of lists and aggregation intended as a proof of concept, and will be expanded in future versions of Blawx.