Rules are the most important part of encoding in Blawx. They are where you describe the inferences Blawx can make to generate legal conclusions.

A rule has two parts. The first part is the “conditions” that must be met for before the inference is valid. The second part is a statement that can be inferred to be true, in those conditions, called the “conclusion.”

A Note on If/Then

If you are a programmer, or if you have experience with other procedural approaches to formalization, like production rule systems, you might expect that a rule represents an "if/then" relationship. That the semantic meaning of the rule is "check to see if these conditions are true, and if so, do these conclusions".

The biggest difference is that a rule in Blawx works in two directions. If a conclusion is not true inside a model (perhaps because you provided that information as a fact), Blawx can infer that the conditions are not all true, also.

Blawx will take the rules that you provide, and generate a new set of rules for proving the opposite conclusion, so that your encoding will be capable of answering additional questions (like "why not?") without you needing to write more rules.

However, the method that Blawx uses to do this requires careful design of your rules. To get the best possible use of rules in Blawx, you should design them with this in mind:

Only include a condition if:

This problem is easier to understand with an example: 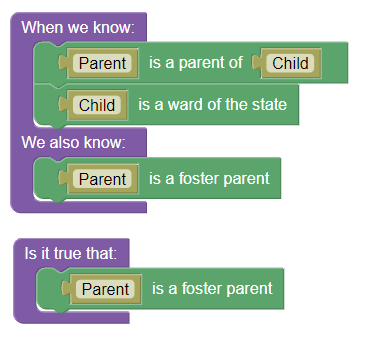 We know that both conditions are necessary for the conclusion to be true.

The question is whether they are sufficient to disprove the conclusion when negated, and the preceding conditions are true. 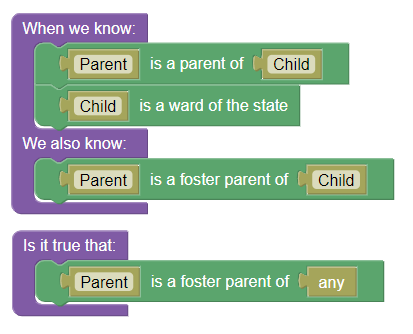 Blawx does not yet have an "or" block, to allow you to set out more than one way that a conclusion might be inferred in your code. In order to represent multiple possible routes for your conclusion to be inferred, you must create multiple rules, one for each possibility.

Consider the rule "a person must be 18 years of age or in active military service to be able to make a will". That would be implemented like this: 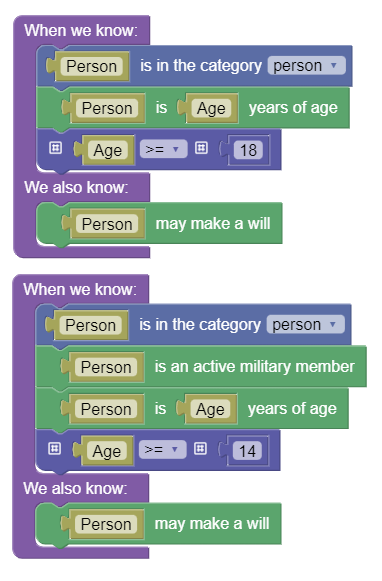 Note that when these possibilities are reversed, each is reversed independently. So the conditions for each must be reversible alone, without the conditions in the other alternatives, for negations to work properly.