Variables are a fundamental part of how Blawx works. You can't do anything interesting without them. But if you have experience with other programming languages, they probably will not behave as you first expect.

Don't worry, variables in Blawx are VERY easy to understand.

Imagine I asked you "this species is carnivourous, it is four-legged, and it is known as man's best friend, what is it?" What would you answer?

The way we are using "it" is exactly how a Blawx variable works.

A Blawx variable is just a name that you give to an unknown. When you use the same name in the same scope, it refers to the same unknown.

This is also precisely the way variables are used in math.

The dog question above could be stated as the conditions of a rule in Blawx like this: 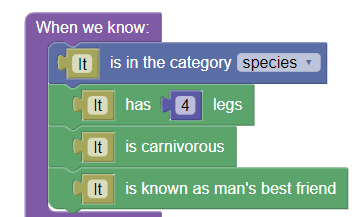 This example uses the word "It" as the name of the variable, but you can use any other name you like.

Note that variable names should not include spaces, and must start with a capital letter.

Do not use a variable in a rule conclusion that wasn't also used in the conditions of that rule. Otherwise, your variable will match with everything in the database, which probably isn't what you wanted.

Because variables are names that you type, and not declared like objects or categories, there is a higher risk of typos using variables that other aspects of Blawx. It is a good practice to copy and paste variable blocks whenever possible to avoid typos.

See the Code Editor Interface Guide for details on copying and pasting code.

The more complicated your data structure, and the more layers of that data structure you need to navigate in order to reach a conclusion, the more variables you will need in your rules and queries.

Blawx is going to automatically find data that can be put in the place of the variable everywhere it appears. And it checks to see if the data is the same in each place the same variable is used.

You might assume that Blawx also checks to see if a different piece of data is used everywhere that different variables are used, but this is not true.

Let's imagine we have the following ontology: 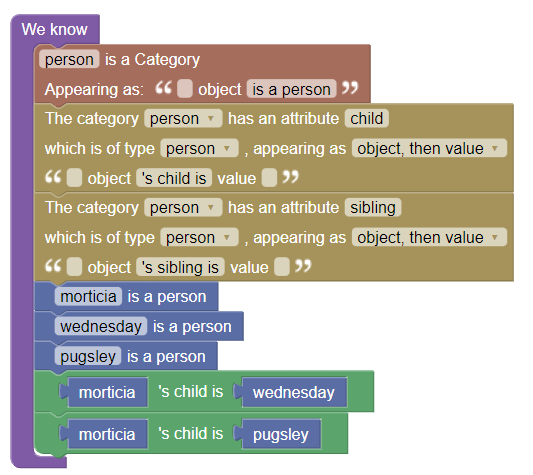 And let's say that we have the following rule in order to calculate siblings: 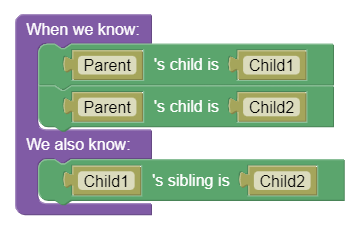 If we ask a question searching for Wednesday's siblings, Blawx will incorrectly tell us that there are two answers: Pugsley, and Wednesday. But of course no one is their own sibling. What went wrong?

Blawx checks to see if there are values that it can put into Parent, Child1, and Child2, using the same values each time each variable is used, and have all of the statements in the condition of the rule be true.

To force a check for difference, you have to be explicit, like this: 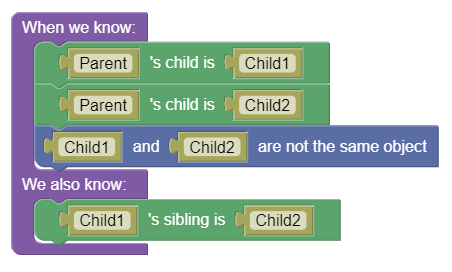 Now Wednesday has only one sibling, Pugsley.

Blawx gives you two different types of variables that you can use:

A normal variable is just a name. Blawx will look for an object or value which, if you put it in everywhere the variable appears, it makes the statement true. And if you used it in a question, it will tell you what that data was.

A named variable is the only kind of variable that will cause Blawx to give you the specific value in response to a question, outside of the explanation.

A variable should start with a capital letter, and have no spaces.

If you need to check that something can be put into a statement, but you don't need to learn what, and you won't ever need Blawx to make sure it's the same something that was used elsewhere, you can use the unnamed variable block.