To start, let's introduce the piece of legislation that we are going to be encoding in Blawx in this Guide, the "Rock Paper Scissors Act".

Hopefully you are familiar with these rules, which are known in different communities by different names, like Rochambeau, and "Boulder, Parchment, Shears."

Why Does Blawx Need the Legal Text?

The first step is giving Blawx the text of the rule itself.

To begin, go to the root of your Blawx server. You may need to create a user account if you have not done so already. When you are logged in, the root of the server will look something like this:

If there are other users on your server who have set their projects to "Published", those projects will appear here, and you will have read-only access to them.

Click "New Project", and in the resulting drop-down choose "New Blank Project". This will open the Project Editor screen, which will look like this: 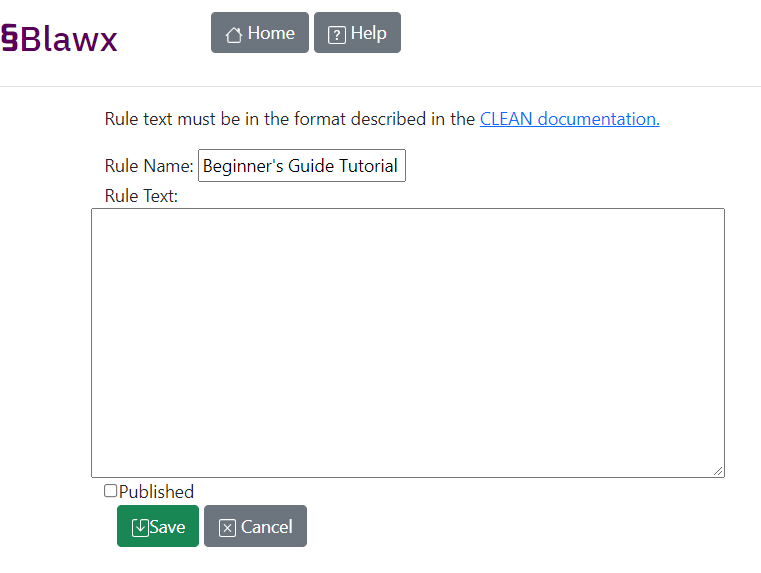 In the Project Editor screen, you can specify a name for your project. Use a name that is different from the "Rock Paper Scissors Act" project that comes with Blawx by default.

It also allows you to set the "Rule text" for this project.

Copy the highlighted monospace plain-text version of the law above, and paste it into that field. 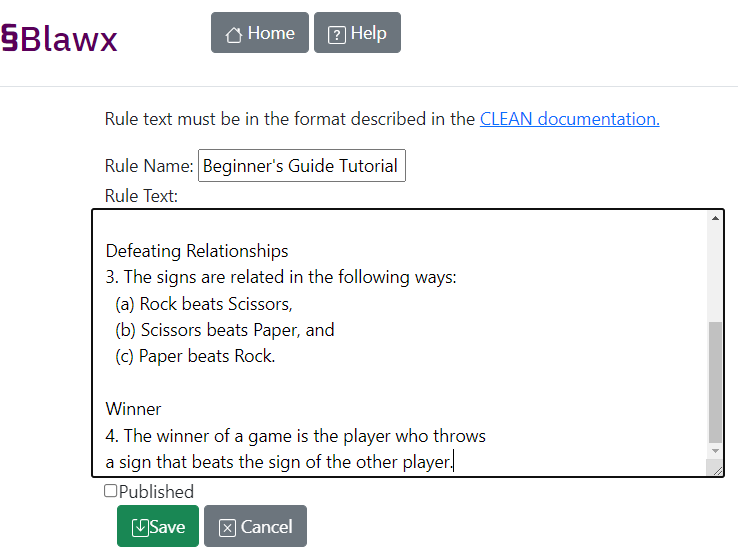 Then click "Save" to save the Project to your Blawx server.

You will be taken back to the root of your Blawx server, and the new Project should appear in the list, like this:

In Step 1, we talked about how to create a new Project in Blawx, and how to provide Blawx with the text of the law you are encoding.

Note that not just any plain-text version of a law will work. Your law must be formatted in a way that is consistent with the CLEAN syntax, which is described elsewhere in the documentation. But as you can see, the CLEAN syntax for the Rock Paper Scissors Act is pretty easy to read.

Next, in Step 2 of the Blawx Beginner's Guide, we will translate the Rock Paper Scissors Act into code.