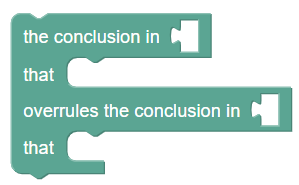 The Overrules block is located in the exceptions drawer of the Blawx toolbox.

What Does It Do?