Blawx provides you with two different types of negation.

The first type of negation is expressed with the "known false” block. It looks like this:

The second type of negation is expressed with the "not" block. It looks like this:

It is very important to understand the difference between them.

"Known False" means it the statement is certainly false.

"Not" means there is no evidence the statement is true.

In an ask statement, "not" checks whether we can derive that something is true.

In an ask statement, if "known false X" succeeds, "not X" will also succeed. But "not X" can also succeed if there is no way to conclude that X is true.

Let's imagine you want to ask if there are no dogs. You might (incorrectly) write this code:

But this code will not work as expected. A "known false" only returns “true” if its contents are explicitly stated to be false. But if a fact stated (or a rule concluded) "it is known false that any is in the category Dog", that would mean “it is impossible for an object to be a dog.” That is not what you meant to check for.

That version of the rule will work as expected.

Not Guilty vs. Innocent

Lawyers are actually often familiar with this distinction between the two different kinds of negation. In criminal trials, when a court decides that a person is "not guilty", they are using the "not" style of negation. "Not guilty" means either the person is innocent (the opposite of guilty), or there was not sufficient proof to find them guilty.

As a general rule, you usually want to use "not" in questions and in rule conditions. "Known false" is the only thing that will work in rule conclusions and facts.

Uncertainty is complicated, and we are still working on communicating how it works clearly. The good news is that understanding it in detail is usually not required in order to use Blawx effectively.

Blawx is based on answer set programming, which allows for five different levels of certainty about a statement inside a single explanation:

Let us imagine that the statement is "socrates is a mortal." Here are the five levels of certainty expressed in Blawx: 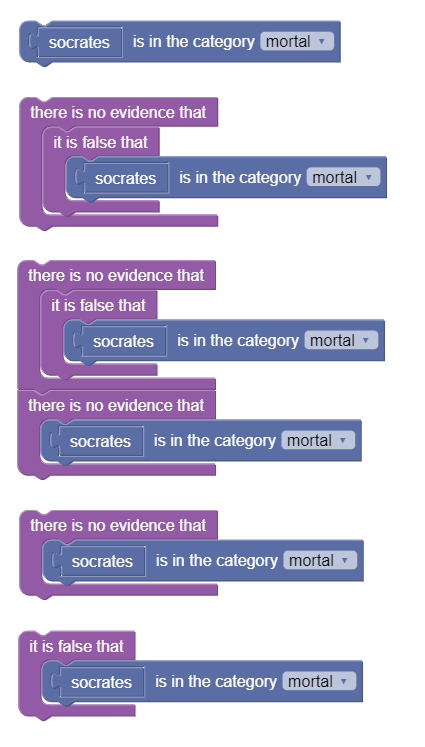 "Known false" just stands in for "the opposite is true".

We can still say "not", and we can describe it as "there is no evidence that".

Having done that, there's now a small list of single statements it is possible to make:

Of course, we might be able to derive more than one of those things at the same time. If we assume that there cannot be no evidence for something that is true, and we cannot conclude something and its opposite at the same time, we are left with only 5 possible combinations of those four statements we can reasonably believe at the same time:

These are the same 5 categories we have above.

So the 5 levels of certainty that can exist in an explanation are the 5 possible combinations of things we can say about a statement and its opposite.

Uncertainty levels are mostly useful for interpreting the meaning of an explanation provided by Blawx, which, for any single statement, will express one of those 5 degrees of certainty.

Consider now a question that has only one answer, and only one explanation, and in that explanation appears only the statement "there is no evidence socrates is immortal".

That would mean that the reasoning in that explanation can hold when socrates is mortal, and when socrates' immortality is unknown. It is allowed, in that scenario, for the statement to be true, or for it to be unknown. Because if it is unknown, there is still no evidence it is false. Only false doesn't work. That is a scenario in which socrates' mortality is "possibly true".