This page is designed to give you a tour of the Blawx Code Editor, which is the interface in which encodings of legal text and tests are developed.

The main elements of the Code Editor interface are the button bar at the top, the navigation pane on the left, the code editor in the middle, and the output pane on the right.

If you are using the Test Editor, there are three additional buttons:

In the Test Editor, there is also a "Save As" option that can be accessed by clicking on the drop-down arrow on the "Save" button. This allows you to duplicate the current test under a new name in the same project.

Note that if you do not have the permissions required to use a feature, that button will be disabled.

The navigation pane appears on the left of the screen, and can be hidden and revealed by clicking on its right border. It gives you a collapsing nested tree view of the rules you are encoding, and allows you to select the section that you want to encode. When you choose a section selector, the code for that selection, if any, is displayed in the coding workspace.

In the Test Editor, there is no navigation pane.

The output pane appears on the right of the screen, and can be hidden and revealed by clicking on its left border. In the Code Editor, it only shows the s(CASP) code generated by Blawx for the current section of the rule.

In the Test Editor, the output pane has two additional tabs. The "Output" tab shows answers to questions when the test is run, and will be displayed automatically when you click "Run". The "Problems" tab displays raw output from the Blawx reasoner, and it primarily used for troubleshooting.

The Blawx code editor consists of two main sections: the toolbox, and the workspace.

The toolbox appears on the left of the code editor, and shows a list of "drawers". Each drawer can be opened to show its contents, which is a set of blocks that can be used by dragging them into the workspace.

All coding is done by dragging blocks from the drawers of the toolbox, placing them on the workspace, configuring their fields, and connecting them to other blocks.

The workspace is a canvas on which you can arrange and modify blocks in order to write your code. The only other visual element in the workspace is the Trash Bin.

Note that if you are viewing an encoding that you do not have permissions to change, the workspace will be read-only.

The trash bin is used to discard blocks that you no longer want on your workspace. This can be done by dragging and dropping blocks into the trash bin, by clicking the Delete key on the keyboard while a block is highlighted, or by deleting blocks using a context menu.

Blocks remain in the trash bin so that if they are deleted accidentally they can be recovered.

Blocks in the Code Editor can have connectors, which is how blocks are combined, and they can have fields, which is how a single block is configured. There are three different types of block fields used in Blawx: text, number, and drop-down.

Text fields and number fields are typed into. Drop-down fields allow you to select an option from a list.

To use a block, you drag it from its drawer to the workspace, connect it to other blocks in your workspace, and set the values in its fields as desired. All coding is done using blocks in this way.

Blocks in Blawx can have outside vertical connectors on the top or bottom of the block.

Blocks can also have inside vertical connectors, to make it so that one block can contain a stack of other blocks inside it.

A block with no outside vertical connectors is called an "outer" block, because when you are writing your code, nothing should appear to be connected to its outside. 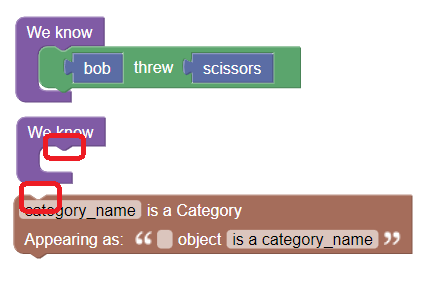 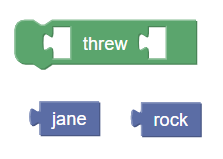 Inputs must be filled. If you don't have something connected to them, you have done something wrong.

Inputs grow to fit whatever is placed inside them, and blocks with an input connector can also have inputs inside them, forcing the outer blocks to grow more.

Dragging Blocks With the Mouse

If you select a block in the interface, and drag it to move it, you will move:

If you only want to delete only one block from the middle of stack, use the keyboard shortcuts or the context menus.

If you delete a single block from the middle of a stack, the blocks below it will be moved up into its place, if that is allowed. If it is not allowed, the bottom of the stack will disconnect, and your code will be incorrect.

Note that the copy and paste commands will work between sections of the same Project, but they will not work between the code editor and the test editor, or between different test editors.

Right clicking on the workspace will give you a context menu with these options:

Right-clicking on an individual block will give you a context menu with these options:

Adding comments to your blocks is a very good way of documenting your thinking in how you decided to encode the rules.