To deal with numbers and math in Blawx code, you need to use the number datatype, number values, calculations, and mathematical operations.

The first thing to do when dealing with numbers is to create attributes that can hold the numerical values by using the Number datatype.

The calculation block requires you to give it the name of a variable that should hold the value that is obtained from the calculation.

If you had a rule that calculated the net amount of an invoice using a calculation block, you would draft that rule like this: 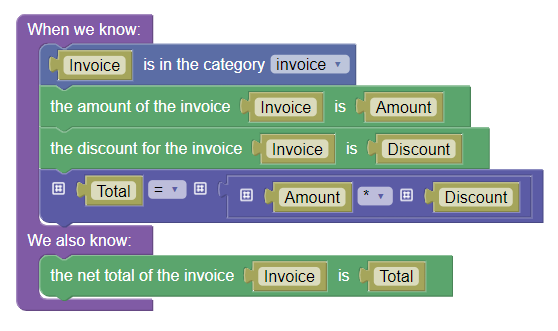 Here, we have used the calculation block to set the variable Total to the result of applying the multiplication operator to the values of "amount" and "discount".

If you are familiar with other kinds of programming, this might seem unfamiliar. In Blawx, the conditions of the rule are things that must be true for the conclusion to hold. A mathematical equation always holds. It is always true. If it is always true, it cannot be a conclusion, because conclusions are only conditionally true. So we put the calculation in the conditions, as a condition that will always be true, (so it will never have the effect of including or excluding possible answers) but which gives us one additional variable that can be used elsewhere in the rule, and that is bound to the result of the calculation. 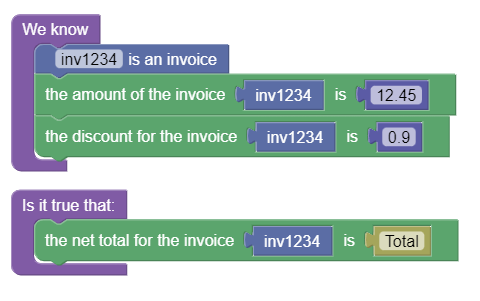 Here you can see we are using the number value block to specify a total and a discount rate.

If you need to do more complicated math, you can nest math operator blocks inside one another. For example, to subtract 2 from the sum of 7 and the product of 4 and 5, you could encode this:

Nesting math operators in this way can cause your code to become very wide, from left to right, and more difficult to read. To avoid this, you can use multiple calculations, and then reuse the variables, like this:

Using either set of blocks should result in the Answer variable being bound to the value 25.

You can compare two numerical values to one another using either logical comparison, or using numerical constraints, both of which are described elsewhere in the documentation.