Welcome to Step 3 of the Blawx Beginner's Guide, which introduces you to testing your code.

Once you are confident that your code behaves in the way that you interpret the law to behave, you can test the code in order to test the law. You can run simulations, or you can search for unanticipated and undesireable outcomes.

From the root of your Blawx server, click on the name of your project, and then click "Create Test".

You will be asked for the name to give this test. Note that test names cannot include spaces.

Give your new test a short name, and you will be returned to the Project screen, and the new test will be listed there. Click on the name of the test to go into the Test Editor.

The Test Editor is very similar to the Code editor, except it does not have a navigation tree, and it has addition information available in the right sidebar to show you what your code is doing.

In this test, we are going to create a fact scenario that represents a game in which bob threw scissors, and jane threw rock. Then we are going to ask who won the game. We expect that the answer should be "jane".

Next, we need to make bob and jane players in testgame. So we will drag out two "played in" blocks from the Known Attributes drawer, and add "bob" and "jane" on the left, and "testgame" on the right, dragging object selectors from the Known Objects drawer.

Lastly, we need to tell Blawx what signs bob and jane threw. To do that we will drag out two "threw" attribute blocks from the Known Attribute drawer, and use the known object selectors for jane, bob, rock, and scissors to fill them out.

When you are done, your fact block should look like this: 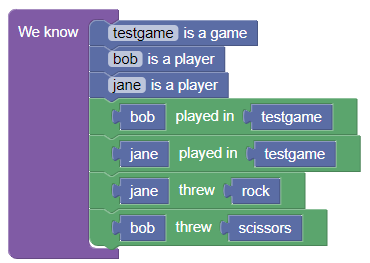 Then we will grab the winner block from the Known Attributes drawer, add the object selector for testgame from the Known Objects drawer, and then add a variable named "Winner" from the Variables drawer. Make sure the name of the variable is capitalized.

When you are done your question should look like this:

Don't forget to save your test by clicking on "Save" in the button bar.

Now you can run your test by clicking on the "Run" button in the button bar. When you do, the right bar will expand (if it is not visible already) and will display the "Output" tab.

If you expand out some of the elements, your Output tab will look like this: 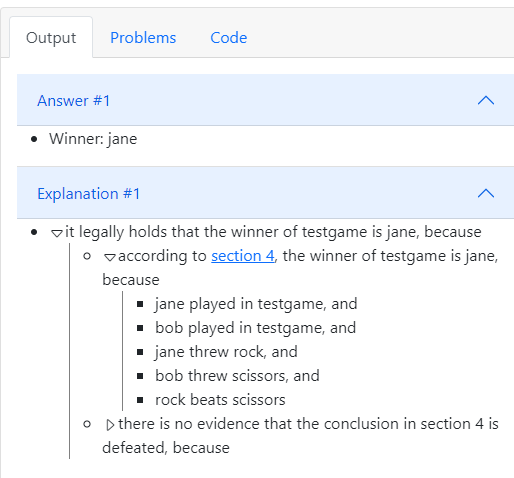 Because you used the "according to" and "holds" blocks in your code, Blawx knows which section of code led to which conclusion, and reports that the conclusion is based on section 4. If you over your mouse over the highlighted text "section 4", a tooltip appears with the text of that legislative section. 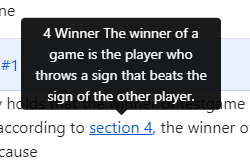 So Blawx is able to give you the answer to the legal question in your fact scenario, it is able to explain that answer in English, and it is able to link that explanation to the legislative source text.

One of the most useful features of Blawx as compared to other Rules as Code tools is the fact that you can not only generate legal answers from fact scenarios, but you can do the reverse. You can use Blawx to generate fact scenarios from legal conclusions.

To demonstrate this, create another test in your project called "hypothetical".

In the Test Editor, drag in four "assume" blocks from the Primary Drawer. We will use these to tell Blawx to assume that:

When you are using Variables in assumption blocks, it doesn't matter what they are named, so we will use the capital letters A and B. Remember that named variables always need to start with capital letters. 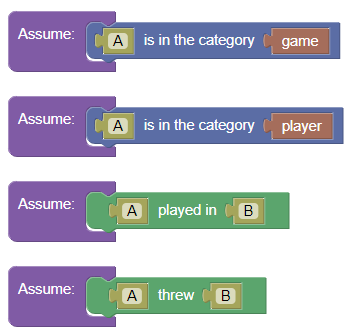 In this test we wil ask whether it holds that any player won any games.

We do this by creating a question that looks like this:

You can now click "Run" in the button bar to run the test. After a few moments, you will get three answers, with one explanation each. Each explanation will be identical, except for the names assigned to the assumed players and the assumed games, and the signs that were thrown.

In the first answer, the winner throws rock, and plays against someone else who threw scissors. In the second, paper beats rock. In the third, scissors beats paper.

Here's what a part of the first explanation looks like: 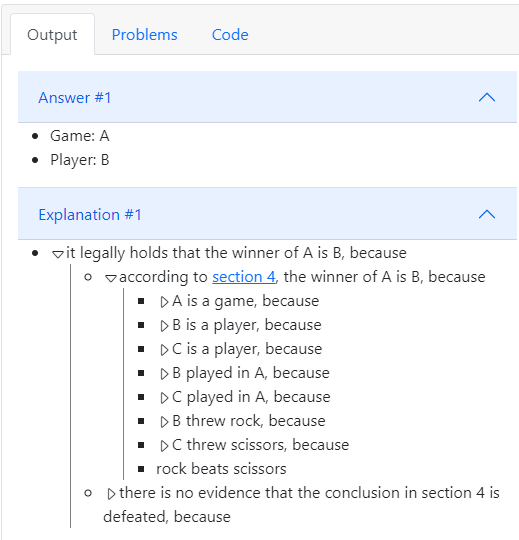 Here, we have asked how many different ways a game of Rock Paper Scissors can be won, and what they are. But this same technique can be used to answer questions like "how many ways are there for a person to qualify for this benefit"? Questions like that can be used to debug your code, and your legislation.

You can also ask questions like "what do I need to do to qualify for this benefit?" This gives your code the ability to say "no, you don't qualify, but if you want to qualify, here are the steps you would need to follow, or the things that you would need to make true."

It can also be used to ask the question "what matters in terms of qualifying for this benefit?", and using the answer to power an expert system that never asks the user for an irrelevant input.

Often when testing, you will ask Blawx a question for which it has no answers, and you would like to know why not. In Blawx, you can just ask.

Create another test in your project called "whynot". Duplicate the fact scenario from Bob versus Jane, above, but let's use a different question.

We'll start by asking a question that we know Blawx should not be able to positively answer. "Is it true that Bob won testgame?" It isn't, so Blawx will return "no models" in the output screen. Here's what your question should look like.

Now, if we were expecting Bob to win, we might want to know why he didn't. To do this, we can reverse the question by dragging a not block from the Logic drawer, and inserting it between the question block and the holds block, like this:

If you run this code, you get one Answer, with two explanations. The answer is that yes, it is true that there is no evidence that Bob won testgame. 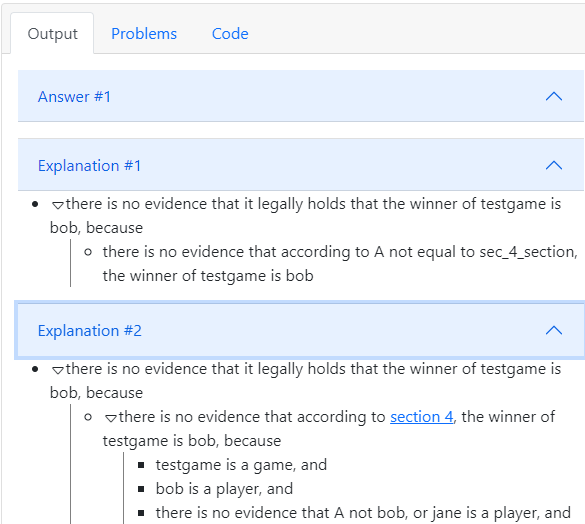 The explanations for negated queries like this can be difficult to read. In essence, the first explanation says there is no other way to find a winner but section 4.

Depending on your code, the explanations for negated questions might be useful to users who are interested in knowing why they do not, for example, qualify for some benefit.

But in its current state, most why not questions generate explanations that are not particularly useful for users. Why not questions are still very valuable when you are writing a test, the test doesn't behave the way you would expect, and you would like to know "why not".

Congrats! You have tested your encoding of the Rock Paper Scissors Act!

Notice that you didn't need to write any additional code to deal with "why not" or "hypothetical" questions. Nor did you need to do any extra work to get access to natural language explanations linked to legislative material. It's all built-in, and available by default, without any additional work on the part of the person writing the code.

Next, check out Step 4 of the Blawx Beginner's Guide, and see how you can ues BlawxBot to turn your encoding into a chatbot-style expert system!